The Artful Escape is coming on September 9 for the Xbox and the PC. And for Johnny Galvatron, the creator of the game, that date has been a long time coming.

The leader of Beethoven & Dinosaur has worked on the musical narrative adventure for more than six years of his life and he is finally done. That’s the way it is with art. On Thursday, publisher Annapurna Interactive showed the game its showcase and revealed the launch date.

“It’s the hardest thing I’ve ever done in my life,” said Galvatron during a press event.

It’s about a teenage guitar prodigy Francis Vendetti who sets out on a psychedelic multidimensional journey to inspire his stage persona and step out of the shadow of his famous musician uncle, a dead folk singer who was like a Bob Dylan character.

“The start of the game shows some of the weight that’s on Francis’s shoulders and his opinions on his own kind of creative persona,” he said.

Above: Francis Vendetti goes is search of his musical persona in The Artful Escape.

The game is loosely autobiographical, as Galvatron, who spoke on a call from Melbourne, Australia, spent about five years of his own life as a musical celebrity himself. As for his own life, he said he signed a record deal a week after playing the first show with his band.

“I was in a rock band back in the day, signed to Warner Brothers and toured the world and did all that sort of stuff,” he said. “And I ended up crashing pretty hard after that. I felt like making a game about it but ended up climbing another mountain making that game.”

They hit the road on their second week.

He wrote a long novel that he never shared with anyone, and that was his apprenticeship in writing. And that turned out to be his transition into game development.

The story is about coming of age, and it was inspired in part by David Bowie’s journey to create his Ziggy Stardust persona, which was just as creative as the music itself.

“Some of the things in the game are about the satellite aspects of a person’s creative persona,” Galvatron said. “It’s about the way they dress, the way they market themselves. The kind of imagery they associate with who they are and the backstory and narrative of who they are.” 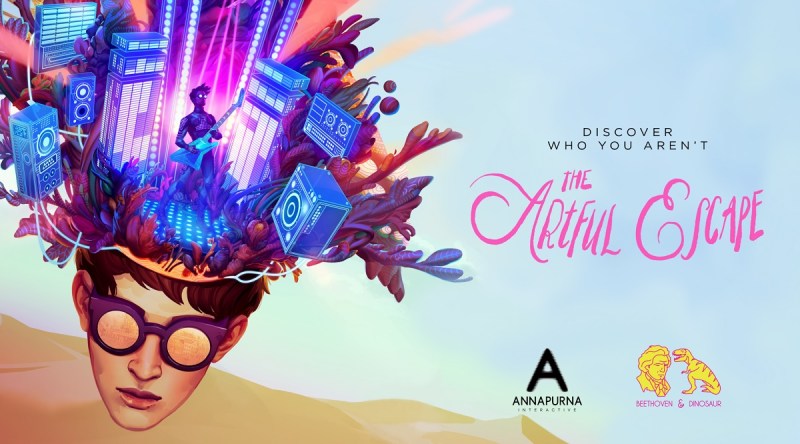 Above: The Artful Escape is coming in September, four years after it was announced.

Galvatron showed off the game at the Electronic Entertainment Expo (E3) in 2017. He had a crew of around eight people, and that was most of the team that worked on the game.

“I don’t see myself so much as Francis because Francis is a very good guitarist and I’m rubbish,” he said. “Francis has a good musical future ahead of him.”

During that time, Annapurna helped level it up.

The game features a strong cast with voice performances by Michael Johnston, Caroline Kinley, Lena Headey, Jason Schwartzman, Mark Strong, and Carl Weathers. The team recorded an entire folk album as part of the backstory for the uncle.

He learned early on to pull back and let the artists bring themselves into his vision for the game.

“The game has been rebooted several times,” he said. “While we were in the process of making this game, we were definitely learning how to make games, which is not ideal. It was an amazing adventure. I think we’ve made a really fantastic game.” 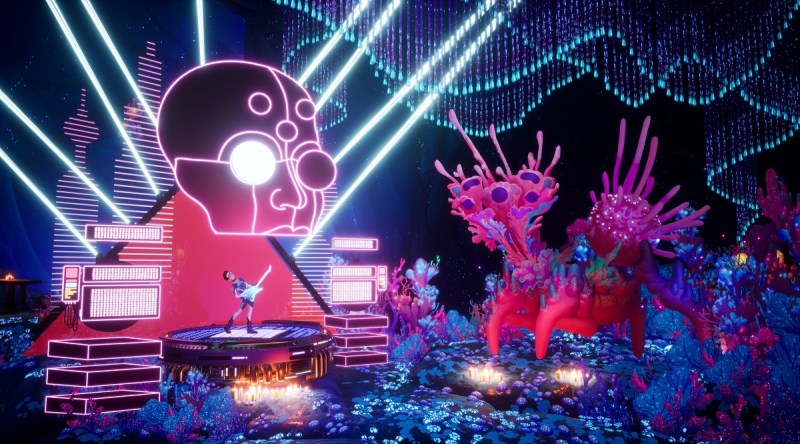 Above: The Artful Escape is a musical coming of age story.

The pandemic affected development. But since the team had already been working well before the pandemic, it wasn’t as catastrophic as it might have been.

“It’s tough being in a creative environment and working on things remotely,” he said. “Imagine trying to sculpt something and someone’s coming in from another room and sculpting it. I thought we were extremely lucky that we can still work. And then we were still getting income.”

He added, “We had enough money to set up people to work from home. So I don’t really have a lot to complain about. I did have a baby. I had a baby in September. So for me, it’s actually been wonderful that I’ve been able to work at home and still change diapers and help out.” 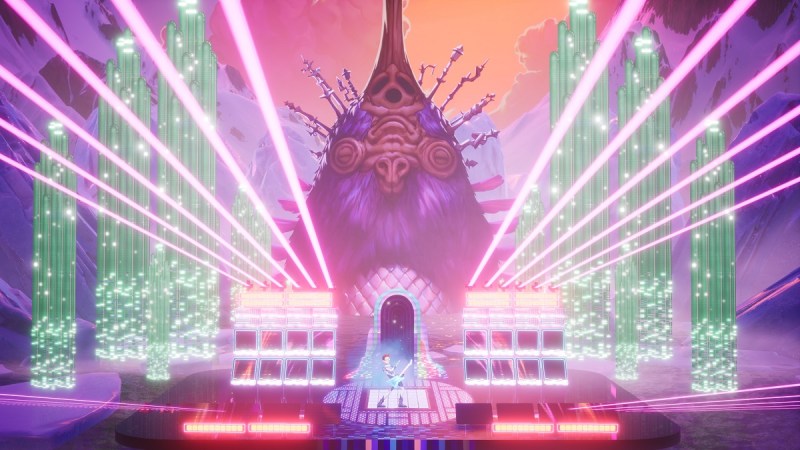 Above: The Artful Escape intertwines gameplay and music.

Galvatron thought at first he was making a simple iPad app. But the ambitions grew.

“I think for most game developers, their ambition is a problem,” Galvatron said. “We had a relatively small team the whole time, until at the end we got an extra programming punch and video editing help. But we never really grew the team.”

Still, Galvatron liked working with Annapurna as they made some of his favorite games.

“It was incredible to just bring those people over and get their opinions on player narrative,” he said. “It’s been a really good relationship. It always feels amazingly reassuring to have that to help you with anything. Unbelievably, we’ve finally gotten there and are ready to show everyone.”

“It’s also about stepping out from the shadow of his famous uncle and how everyone has different expectations,” Galvatron said. “Francis’s journey along the way is like realizing that to be a good artist isn’t to give people what they want to but to give them something they themselves could not have imagined.”

By the scenes in the middle of the game that I saw, it has some weird science fiction scenery. One section of the game is dubbed Ode to Lightning, who is the captain of the cosmic lung, which is a kind of opera house that floats through the multiverse. The game matches the gameplay and the tempo of the music.

“I’m proud of the tempo, the pacing, and I guess what I would call the dynamics of the game,” he said. “Everything is a different weapon in the arsenal. You can tell stories, do cinematography with the music have gameplay with a narrative, and try to get his themes to line up with crescendos and bring it back down. Get them all in harmony. I think we’ve done really well with achieving that.”

And he thinks it has turned out good.

“I’m really happy with how it’s coming out,” he said.

As for the future, he said that his game studio is good at making musical games and so it is likely they will make something in the future that follows the musical path.

“I think I will have more musical aspects in my games,” he said. “We’ve got a great music team here, and it’s one of our strengths. Cool music mechanics is going to be part of the stuff we make.” 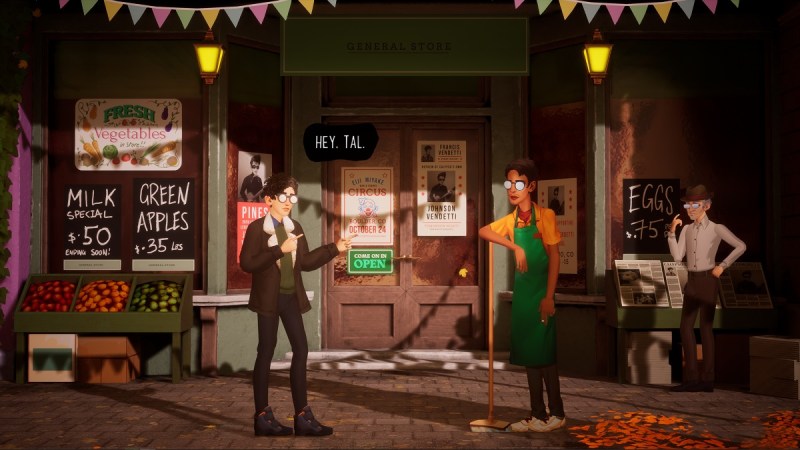 Above: Francis Vendetti on the eve of his musical debut.

Now Galvatron is winding down. What would he do differently?

“Hire everyone earlier? Don’t try and do everything,” he said. “Appreciate other people’s artistic abilities and incorporate it in your right. And invest in Bitcoin.”

During his big moment on a press call this week, Galvatron said, “I’m in Melbourne the Rock City. And I’ve been working on The Artful Escape for 48 years. And it’s finally ready….Tomorrow is my last day working on the game. And it does feel insane. I’m in lockdown. I can’t even go down to the pub and chill out.”

He added, “There was a long time searching for what was fun about some parts and what wasn’t working about others. It was a long process of learning to make games and always just trying to make things better to the point where the game took several years to make. But I’m actually so happy with it. So I think it was worth it.”