The $399 Ultimate Ears HyperBoom Bluetooth speaker is one of my favorite gadgets of 2020. It has great sound quality, near-360-degree sound delivery, long-lasting battery life, and elegant design — everything you can expect from the company’s previous models, but far bigger in size and power. This speaker’s measurements are somewhat similar to the Xbox Series X (the HyperBoom has about 2.5 inches in height and 1.5 inches in thickness on the next-gen console, according to this Polygon post), though it weighs a whopping 13 pounds.

Party speakers, which the HyperBoom is billed as, aren’t known for having a design worth talking about — at least in a positive manner. They’re usually clad in plastic and LEDs and are made to look more like a powerful PA system. So it’s a delight that Ultimate Ears’ new speaker is both powerful and looks good placed just about anywhere. It resembles a smart speaker, like the Google Home Max, Amazon Echo Studio, or Apple HomePod, but it isn’t one. It doesn’t support Wi-Fi connectivity, and its microphone listens for changes in your environment’s acoustics to tweak its adaptive equalizer (you can customize it yourself if you’d prefer to), but there’s no support for voice commands here, which I frankly welcome.

When it comes to power, the HyperBoom earns its name. I’m convinced that it’s far more powerful than the Google Home Max that I have in my apartment, and that front-firing speaker requires being plugged in at all times. As the photos indicate, the HyperBoom has four sides, and you’ll get a lot of sound from every angle, albeit different kinds of sound. In this diamond-shaped speaker, the two 4.5-inch subwoofers face the rear. So you’ll get the best bass performance if you let it reverberate your walls near the corner of your room. Aiming outward on the other two sides are the two 3.5-inch passive radiators and two 1-inch tweeters. You’ll quickly get a sense of how you should orient the HyperBoom in your room once you start hearing music. And no matter how loud you like to play your music, it sounds clear and balanced with plenty of bass, mids, and highs. The HyperBoom fares nearly as well outdoors as it does inside. It was able to maintain powerful bass performance despite not having any walls to close in around the sound. 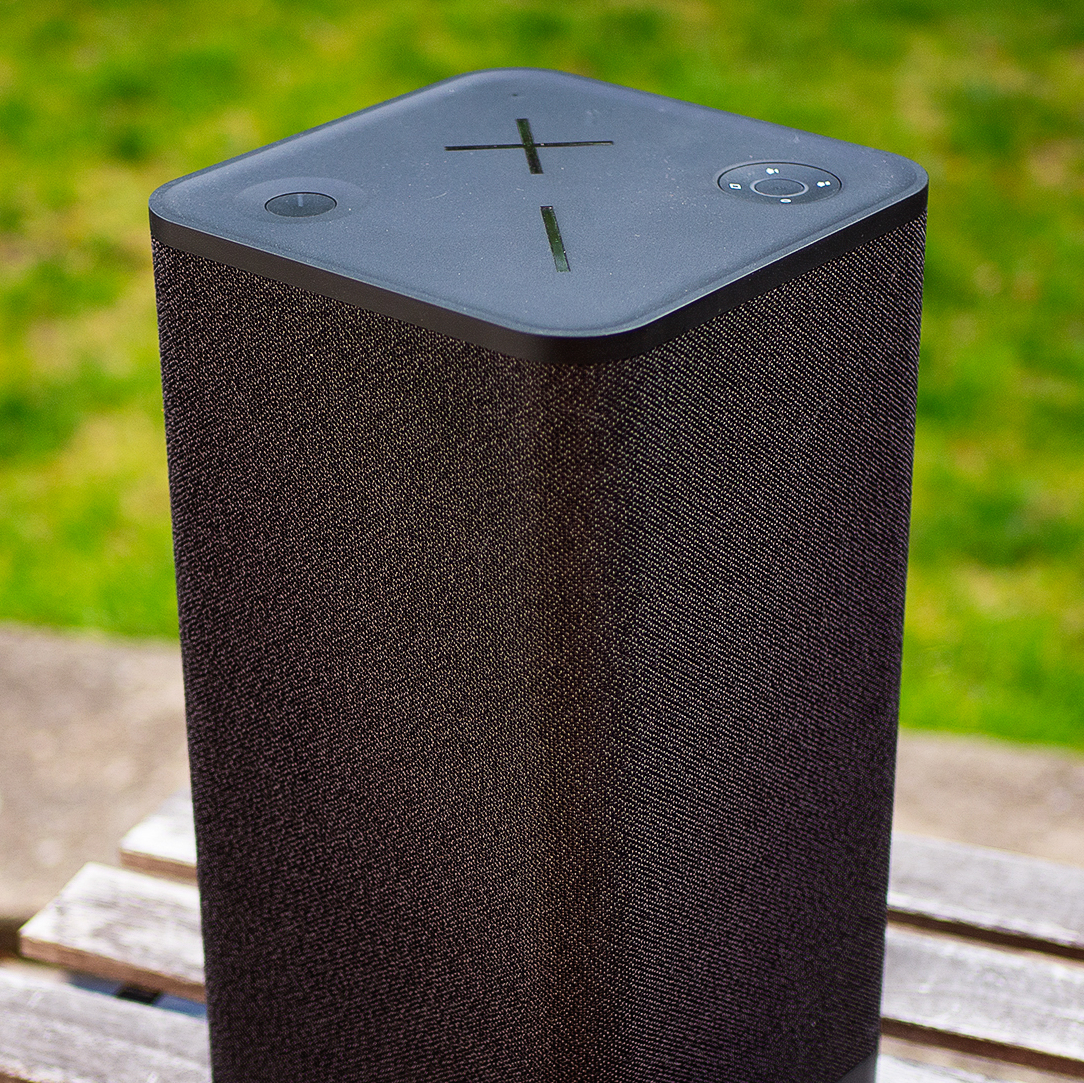 Power is to be expected for a speaker this big, heavy, and expensive, but what impresses me most about the HyperBoom is its versatility and broad selection of ports and connectivity options for your devices. It’s IPX4 water-resistant with the connection port closed. And with its handle, you can easily move it around inside or outside, so long as you can lug its hefty weight. Its proprietary 90W barrel charger can fully charge this speaker in less than three hours, and that battery can last for a whole day of nonstop use, or up to three hours if you’re running this speaker at maximum volume. I didn’t notice a difference in sound performance whether it was connected to power or running off the battery.

This speaker really comes into its own with connectivity. It supports two concurrent Bluetooth connections with the A2DP codec, letting you flip between them with a button press on the speaker itself or through its companion app. Ultimate Ears claims 150-feet of Bluetooth range for the HyperBoom. I don’t have that kind of room at home, but it had no issue keeping a steady connection with my phone separated by 30 feet and a thick brick wall.

This speaker fades gently between audio sources as you toggle them, so you can smoothly transition from one song on, say, a phone to another on your tablet without awkwardly cutting off the tunes. Additionally, it has a 3.5mm input and a digital optical audio port, letting you connect another two devices. There’s also a USB Type-A port for keeping a device topped up. For the high asking price, it would have been nice to have Wi-Fi support, like Sonos and other speakers. Playing music through Bluetooth is fine, but it shows its limitations when you watch a YouTube video, and it starts coming out of the speaker or when an incoming phone call interrupts your jams.

With four connection options in total, it’s easy to see how this could be a formidable party speaker. But even in my little apartment, the HyperBoom is both a capable speaker for music and podcasts and a serviceable soundbar replacement with its digital optical port. Connected to my TV, it does a stellar job piping through my gaming console audio. Also, I had a UE Boom 2 laying around, and with the Party Up feature in the companion app that lets you wirelessly pair these speakers together, it took just a few minutes to make a little surround sound system out of these gadgets.

It’s always good when a product has a lot of functionality packed in, and the HyperBoom gets extra marks for all of those functions being intuitive to use, whether you’re standing right in front of the speaker or from across the room. For instance, you can power the speaker on through its dedicated power button, or you can turn it on remotely through the powers of Bluetooth low-energy via the companion app. Adjusting the volume works similarly: either by tapping the large + or – buttons located on the top of the speaker or through any other device that’s connected via Bluetooth. The source dial lets you connect to any of the devices connected, though you can also remotely switch the source through the app. It’s fluid, and both methods worked perfectly in my testing.

The HyperBoom wasn’t made to answer your queries or set timers. It was made to bring the house down at large parties. And even though the coronavirus pandemic has put a dampening on partygoers for the meantime, Ultimate Ears’ big speaker somehow feels just as natural to have in my tiny apartment as a smart speaker. Part of the reason for that is because it looks good, but the main factor is its connectivity. The HyperBoom can elevate the sound experience of every device that I use, and that makes its $399 asking price far easier to swallow.