One of the city’s priciest restaurants is taking up too much sidewalk space and exposing pedestrians to maskless outdoor diners on Central Park South, local residents charge.

Marea, a Michelin-starred Italian seafood restaurant overlooking Central Park, has also set up six outdoor tables in an adjacent courtyard — a space for which the posh eatery has yet to file for a liquor license, a state official told The Post.

Restaurants that expand their outdoor seating area in adjacent areas to conform with pandemic dining rules have five days to submit diagrams of the space to the State Liquor Authority for approval.

On the sidewalk, Marea’s 11 tables are set up under scaffolding “effectively cutting the sidewalk in half,” said a longtime Central Park South resident in a July 16 letter to the restaurant’s management and seen by The Post.

“It turns the thoroughfare into a cramped passage that has forced pedestrians to dodge waitstaff, move out from under the scaffolding onto a narrow strip by the curb or fully on to the street (into a bus stop),” the letter writer griped. “There is barely room for two pedestrians walking in opposite directions to pass each other and all this while far fewer than 6 feet separate anyone, let alone unmasked restaurant patrons.”

Last week, The Post observed sidewalk pedestrians turning sideways when they confronted other pedestrians along the narrow stretch in front of the restaurant at 240 Central Park South, as diners munched maskless at the sidewalk tables. 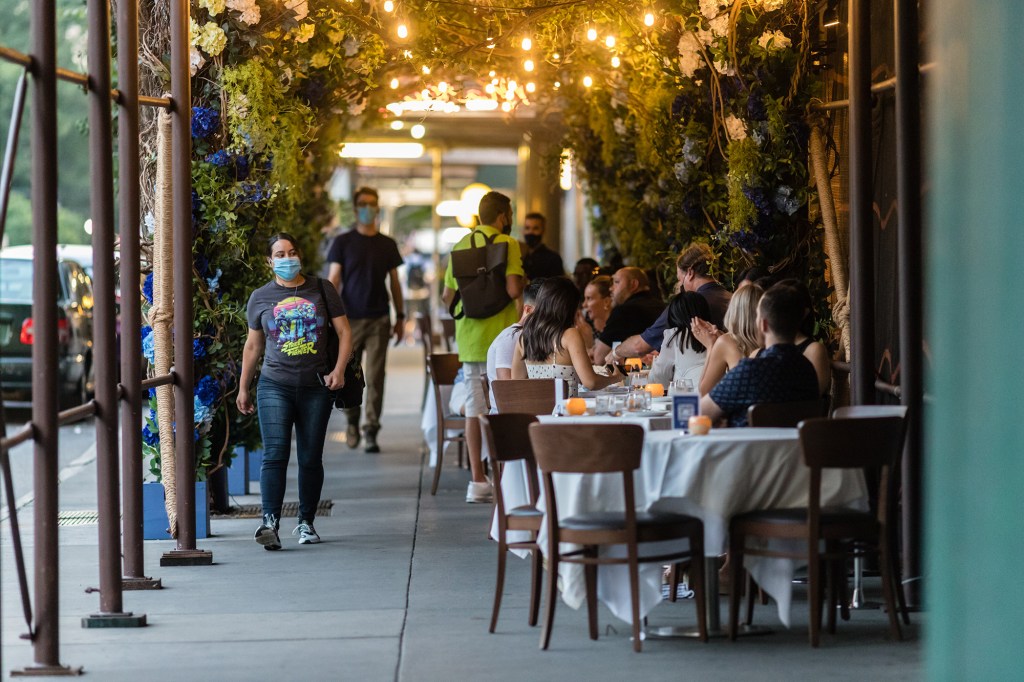 Not even the lakes are safe this summer. While shark…

“I understand the need for restaurants to open and I totally support that, but this is just totally unacceptable,” said one pedestrian who did not want to be named and who walks by the restaurant daily. “It’s really outrageous that a lot of the elderly residents who live around here now have to cross the street in order to be 6 feet away from diners who are not wearing masks. If you are trying to walk by the restaurant, you are just inches from them.”

A spokeswoman for Marea, where a plate of fusilli with wine-braised octopus and bone marrow goes for $38 and a glass of Barolo Riserva from Italy is $260, said the restaurant has strictly complied with city Department of Transportation rules on “proper spacing and appropriate safety protocols.” DOT oversees temporary outdoor dining that has spilled onto city streets and sidewalks during the coronavirus crisis.

But the famed eatery would not say if it has a liquor license for its courtyard.

“The courtyard space has, for many years, been part of the restaurant layout, but it was not until this recent unprecedented time that we chose to utilize the space to safely serve our clients,” said Kaitlin Oks, director of brands and communication for the Altamarea Group.

Aaron lauded for grace amid racism during home run pursuit

WandaVision’s sword symbol connects to past and future Marvel movies