The much loved Nintendo Switch games could be your holiday fix this winter. With amazing offers for a limited period, Nintendo eShop has more than 700 Switch games of Nintendo on sale.

Nintendo games can be preferred as the best way of playing games over the others for a bunch of different reasons. To begin with, these games are compact, convenient and can be played easily on its handheld screen.

Moreover, the gaming company gives a platform to other developers apart from the big-budget run developers. This provides a wide range of games with variety in ideas and approaches to the gamers. Further, Nintendo has consistently produced quality games along with a good vision. Therefore, if you are a gamer, the Switch is here to provide you with the best plans for the holiday season.

Furthermore, the Nintendo eShop provides a discount on the Switch games. For instance, Doraemon Story of Seasons is available at a sale offer of $34.99 instead of the original $49.99 price tag. Final Fantasy 8 is on sale for $13.39 instead of $19.99. Also, My Time at Portia is worth $17.99 from $29.99. Therefore, if you are a gamer, the Switch is here to provide you with the best plans for the holiday season.

The cherry on the cake is the availability of all these offers on these games although for a limited period. With the grace of the offer by Amazon, you can get back $30 on the purchase of Switch along with Gray Joy-Con before Christmas.

However, the purchase of the Switch with Neon Red Jo-Con and the Neon Blue Joy-Con will get you a credit worth $30 but after Christmas. To get the offer one has to apply ‘D3E2CDJ6GB6S’ as the code. The code, however, will not apply to purchases on sites other than Amazon. Therefore, make sure to grab your Nintendo Switch before you run out of time.

More about the Nintendo Switch:

Hence, cut the delay and grab your very own Nintendo Switch.

Should you repair or buy a new laptop?

Dating app Grindr will finally remove its ethnicity filter, following years of criticism culminating in accusations of hypocrisy regarding the company’s stance on #BlackLivesMatter. The app currently lets users filter potential matches based on age, height, weight and ethnicity, but the company — which says it has a “zero-tolerance policy for racism and hate speech” — has confirmed the ethnicity filter will be removed from the next version of the app.

The change, which coincides with the start of Pride month, appears to have been catalyzed by responses to a tweet in which Grindr said, “Demand justice. #BlackLiveMatter,” in relation to the ongoing protests in the US and around the world following the alleged murder of George Floyd by police officer Derek Chauvin in Minneapolis, Minnesota. One response to the tweet said “remove the ethnicity filter” and was subsequently retweeted 1,000 times. Grindr later deleted its original tweet, replacing it with the below.

Microsoft is crediting a developer after he accused the company of copying the core mechanics of its new Windows Package Manager. AppGet developer Keivan Beigi provided a detailed account of Microsoft reaching out with interest about his app, inviting him for interviews, and then ghosting him for months before unveiling an app that he felt was inspired by his own work.

Beigi claimed the “core mechanics, terminology, the manifest format and structure, even the package repository’s folder structure” of Microsoft’s Windows Package Manager (winget) are all heavily inspired by AppGet. Microsoft only briefly mentioned AppGet once in its announcement, in a throwaway line

that lists other Windows package managers.

Microsoft doesn’t dispute the claims. “Our goal is to provide a great product to our customers and community where everyone can contribute and receive recognition,” says Andrew Clinick, a program manager responsible for the app model at Microsoft, in a blog post. “Over the past couple of days we’ve listened and learned from our community and clearly we did not live up to this goal. More specifically, we failed to live up to this with Keivan and AppGet. This was the last thing that we wanted.”

Clinick stops short of directly apologizing for the circumstances around AppGet and winget, and admits Microsoft’s implementation was inspired — or as he puts it “helped us get to a better product direction” — by AppGet:

Seamless updates for applications in the repository

Microsoft is now promising to credit Beigi in an upcoming update to the readme portion of the Windows Package Manager. We reached out to Beigi to comment on the blog post and Microsoft’s overall response, but the developer says he’s still in discussions with Microsoft over the issue. “There are a few areas Andrew and I have been discussing,” says Beigi in a comment on GitHub. “Hopefully we’ll have something to share with you guys soon.”

Shortly after revealing its driverless vehicle fleet has racked up over 2 million autonomous miles, a total that stands at 3 million today, Yandex unveiled its fourth-generation self-driving car design. It’s built atop the 2020 Hyundai Sonata and will soon join the Moscow company’s over 100 autonomous Toyota Priuses on the road.

Autonomous vehicle designs abound, from Uber and Waymo’s modified Volvo XC90 and Jaguar I-Pace to Cruise’s Origin, which is without steering wheel or pedals. But despite differences in appearance, each new generation brings improvements to perception across the industry, enabling the cars to navigate roads more safely than their predecessors.

This appears to be the case with Yandex’s fourth-generation car, at least, as it adds three cameras for a total of nine (up from the third generation’s six) and moves the radar system from beneath the bumpers to the roof. These changes, along with reoriented front lidar sensors, help it better distinguish smaller objects around the vehicle, Yandex says. The autonomous 2020 Sonata can supposedly “see” obstacles more quickly in scenarios with limited side visibility, such as when leaving an alley to turn onto a busy street.

inked a memorandum of understanding to architect the control systems for level 4 and level 5 cars, categories of automation defined by the Society of Automotive Engineers as requiring limited to no human intervention.) And while the internal computer’s specs are similar to those of the third generation, which packs several Nvidia GTX graphics cards, the cooling was “significantly” reworked to fit the Sonatas.
Report Door Transform 2020 Online – July 15-17. Join leading AI executives: Register for the free livestream.

Work on a prototype vehicle began in May 2019, and it was tested on a closed track in a range of weather and simulated traffic conditions.

“We’re excited to reveal the great progress we’ve made in the first year of our collaboration with Hyundai Mobis,” said head of Yandex self-driving Dmitry Polishchuk in a statement. “In one of the first projects to come from our work together, we assembled our first self-driving Hyundai Sonata prototype last summer in just a month.”

Yandex says an initial set of five Sonatas is now operating on the streets of Moscow. The company adds that 100 more will be added to the fleet and deployed as part of tests in Michigan and an ongoing robo-taxi program in Innopolis (but not Tel Aviv). That will bring the total size of the company’s fleet to roughly 200 by the end of 2020, including the 105 self-driving Toyota Priuses it has on the road.

Work on Yandex’s platform began in earnest in 2016, when the company’s 120-person self-driving team started piecing together components atop a Toyota Prius V chassis. What emerged is largely custom, from the sizable under-the-trunk PC to the roof-mounted sensor stack consisting of three Velodyne lidars, five cameras, eight radars, and GPS.

Currently, a small team within Yandex handcrafts maps of areas ahead of deployments, but the company expects the process to become more or less automatic in the future. Yandex says its taxis have given over 8,000 autonomous rides both with and without in-car safety drivers who keep tabs on route progress (along with teleoperators). And within four years, the company intends to build a car without a steering wheel that’s capable of “human-level” driving in certain cities. 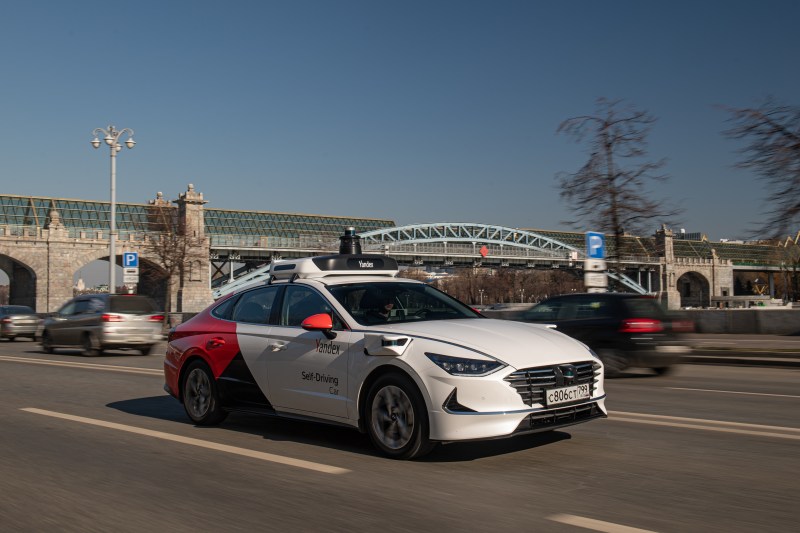 However, the pandemic threatens to push those plans far back into the future, as it could for competitors. Earlier this year, autonomous vehicle companies that include Waymo, Cruise, Uber, and Lyft were forced to pause commercial and testing efforts as a result of shelter-in-place orders. Some have since resumed, but experts believe the disruptions — and economic fallout — could impact their paths to market.

Indeed, Yandex says the pandemic delayed this week’s announcement. “The development of the fourth-generation cars was completed earlier this year.  We started operating the first set of the fourth-generation cars in early March when they were complete but delayed the announcement until the next steps were more clear,” a spokesperson said. “Moving forward, we will slowly roll out the other vehicles across our testing locations and put them on the roads in line with the local regulations … We are continually improving the AV tech, and this process is in parallel with the development of a new self-driving platform.”

Australia asks embassy in U.S. to register concern over cameraman

Raj Kapoor Death Anniversary: 10 Songs Of ‘The Showman Of The Millennium’ That Still Rule Our Playlists

Five police shot during U.S. protests, Trump says he could bring in military

Amazon.com was briefly down for many in the US

Zoom paid accounts reportedly will get strong encryption for calls