Inside an early version of Microsoft Flight Simulator, my tiny bush plane is perched at the far end of an airstrip that the locals call Lukla Airport. As a native of the flatlands of Illinois, it’s one of the most terrifying places I’ve ever been inside a video game. At the end of the runway is a nearly vertical drop of some 9,000 feet into the river below. There’s a nasty storm creeping up from the next valley, so it’s now or never.

I push the throttle to maximum, ease off the toe brakes, and begin rolling forward. The runway immediately dives down on a 12% gradient. Walls and buildings seem to crowd in on every side as the other end of the valley rises up to fill the windscreen. My eyes are glued to the centerline. With the tail rising, my feet are desperately working the rudder to keep the tiny little Savage Cub on two wheels. In my peripheral vision, I’m waiting for the airspeed indicator to go somewhere north of the plane’s 58 kph stall speed. Once it does, I rotate back on the stick, lifting the little yellow plane gingerly into the air. It’s only with an aggressive roll to the right and a little extra rudder that I can keep from dragging a wingtip on the ground.

And I’m off, sailing through a Himalayan river valley at dusk.

Trimming the plane out at a safe cruising altitude, I can finally take in the sights. The clouds, the land, and the shadows working across it all are breathtakingly beautiful. Behind me, the little sliver of asphalt known as LUA vanishes into the distance.

Five minutes later, I’m flying a twin-engine turboprop over Sicily. Then a Cessna over Greek islands; the Sahara desert; a muddy river in Vietnam; the bright lights of Tokyo. I’m in an Airbus A320, banking left across the wild architecture of Dubai. And then, on a whim, I decide to stop by the cottage that’s been in my wife’s family for nearly 100 years.

Before the hour has passed, I’m doing laps on the water near Dowagiac, Michigan. It’s a little slice of heaven that I’ve motored on hundreds of times before, with a beer in one hand and the wheel of a pontoon boat in the other. It’s just that this time I’m in my office, and sailing around in an Icon A5 amphibious airplane.

This is the kind of pure escapism that Microsoft Flight Simulator provides, an uncanny blend of the familiar and the foreign. It brings together satellite and photographic imagery, more than 2 petabytes of information from Bing and other partners, to create a realistic simulation of the entire planet Earth. The game — it feels so strange to call something this complex a “game” — comes out in less than a month.

It’s easily the most magical thing I’ve ever seen on a computer screen.

But it’s not perfect. There are moments of verisimilitude, where the virtual and the real seem to occupy the same space for just an instant. But the illusion invariably breaks. These kinds of hitches aren’t like the bugs you see in regular games — not all of them, at least. I’ve had a plane just flip over for no reason while parked at the gate. Pulling back from the gate at Heathrow, I was actually able to pull through the gate without incident. But some of these bugs are truly hard to describe.

Flying low over the Chicago River, I caught a glimpse of the iconic bridges that connect the Loop to the rest of the city. I watched as cars drove up and over the towers on the ends of those bridges — not on the actual road surface — as if they were toys being pushed around by a giant toddler who doesn’t know how bridges work. Over London, the beautiful skyline was marred by window textures — especially at night — that don’t quite line up the way they should, like poorly placed stickers on a Lego model.

It’s not just details like bridges and office buildings, however. The same sorts of irregularities apply to rivers and roadways — the kinds of things you need to reference in order to safely navigate an airplane. It’s called VFR, or “visual flight rules.” Developer Asobo Studio says the goal is to make the entire planet navigable via VFR, but that’s much easier said than done.

During a press briefing on July 15, the developer explained that it’s working with more than just Bing data. It’s pulling in elevation data, as well as discrete, supplementary photographic data sets to enhance the fidelity of the game. All of that is fed into artificial intelligence, running on Microsoft’s Azure cloud infrastructure, that spits out a model of the planet. In certain places, the result is incredible. Sometimes, it’s inscrutable.

Consider, for instance, a trip I took on Tuesday to Nouadhibou, along the western coast of Africa. The second-largest city in Mauritania looks just like a page of Bing Maps from 35,000 feet. Cruising in from the north, it’s easy to use the major roadways to locate Nouadhibou International Airport. South of the city, farms of massive wind turbines rise up from the arid landscape. It’s a feature not easily spotted from so high up, but at 1,000 feet, they’re imposing and impossible to miss.

However, the city’s defining characteristic — the massive ship graveyard, a collection of rusting hulks that dot the coastline — is absent. Meanwhile, the giant fishing fleet is relegated to a smear of texture that lurks far below the waves.

Similar situations abound. Inside that Himalayan river valley below Lukla Airport, for instance, a waterway seemed to want to crawl up the sides of the mountain. A misplaced animation made it look like the hills were weeping. The famous Arecibo radio telescope in Puerto Rico looks like a greasy gray gumdrop. And along Maui’s famous Road to Hana, there simply isn’t any road to speak of. It’s as if the jungle there is just too dense for satellites to penetrate.

And it likely is. That’s why the team at Asobo has plans for discrete updates, adding higher definition and enhanced detail to regions all around the world in the weeks and months after launch. Microsoft Flight Simulator isn’t simply a game, the developers tell me. It’s a platform that they intend to support for at least a decade. And they’re thinking ahead in that regard, by including an in-game marketplace for partners to sell their add-ons. Most importantly, the software development kit will be available free of charge. It could help make it a modder’s paradise.

Microsoft Flight Simulator is an incredibly dense game. By far, my favorite feature is the co-pilot AI. Flipping a toggle, I can have the AI handle communication with the control tower, checking in and getting me clearance to take off and land. I can also give it full control of the airplane, which is incredibly important when taxiing around massive airports like Charles de Gaulle, Heathrow, and O’Hare. I have no idea where taxiway A4 is, or how it connects to C23, but my little AI helper does. And when she’s got me held short of the runway, it’s easy to take the reins and get the bird in the air.

Additionally, Microsoft Flight Simulator will launch with a short flight tutorial. Using it took me just the better part of an hour to move from orientation to my first solo flight over Arizona in a Cessna. How exactly to fly the massive Boeing 787-10 Dreamliner, and what all the various buttons and dials inside its cockpit do, is simply beyond me. Microsoft Flight Simulator doesn’t seem very interested in teaching me, outside of a set of preflight checklists for starting the engine.

Where the game opens up is with smaller planes, like the A5 and the Savage Cub. Flying low and slow, you can really get a feeling for their limitations. Then, switching to the Pitts Special S-2S aerobatic plane, you can put the nose down and do loop-the-loops with abandon. The new flight model allows for realistic stalls, which means you can try your hand at all the tricks performed at the world’s great airshows from the comfort of your own home.

But that same ease of use and diversity in the game’s smaller planes puts players up against the weird incongruities of its landscape. Luckily, Microsoft Flight Simulator includes an entire other world — the clouds. The game’s true volumetric clouds are an absolute joy to explore. And that’s in part because they’re not real. While the game pulls real-world weather data in real time, in part to allow pilots to practice flying where they live, the minutiae of each weather system is procedurally generated. The developers say they have the world divided into 2 million boxes — roughly 100 square miles each — where each box is running its own simulation of the weather in real time.

I’m no real-world pilot, but I’ve looked at the sky for about 40 years now. I’m here to tell you: These clouds look damn good.

Microsoft Flight Simulator is due out on Aug. 18. There are three versions available, ranging in price from $59.99 to $119.99. Asobo promises a steady stream of free content to follow. The game is also slated to arrive in the future on Xbox consoles, where it will be part of the Xbox Game Pass subscription program. 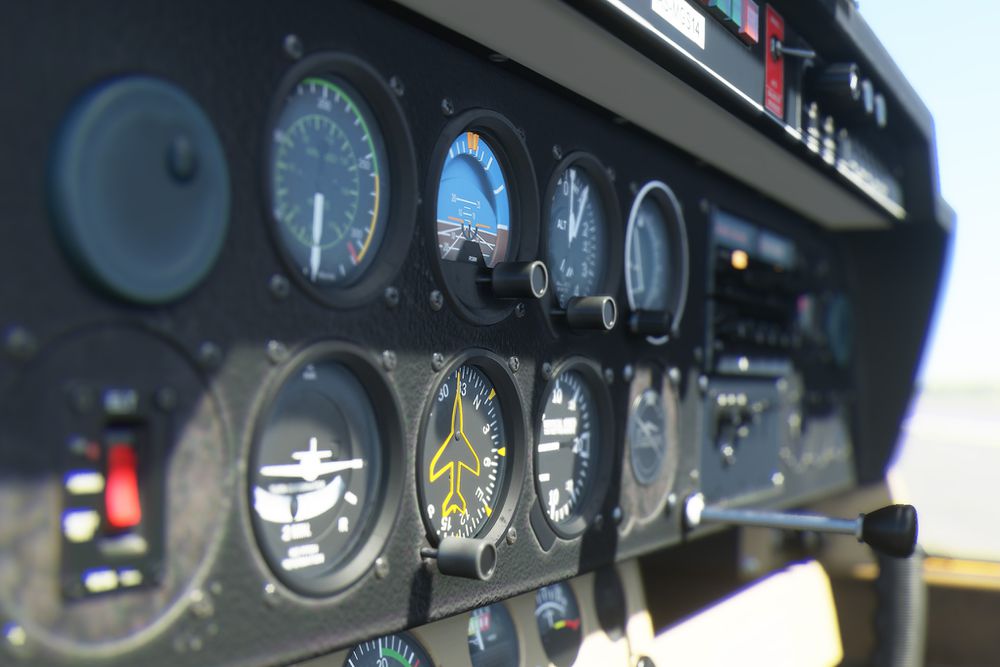 Report Door has affiliate partnerships. These do not influence editorial content, though Report Door may earn commissions for products purchased via affiliate links. For more information, see our ethics policy.