In a different 2020, I could be telling you that the Huawei P40 Pro is one of the best phones you could buy. After all, it sees the Chinese telecoms giant at the height of its hardware powers, delivering a device that performs extremely well and leaves little off its spec sheet.

But the trade war President Trump is waging against China has expanded to single out Huawei specifically, placing the telecoms giant on the Entity List and banning most American companies from doing business with it. Whatever your views on the national security allegations, the consequences for Huawei’s phone business are clear: the company can’t ship new devices with Google services, including Google apps and the Play Store. And, for a variety of reasons, this makes these phones total nonstarters for most people in most Western markets, not just the US.

For the sake of the historical record and technological interest, though, it’s worth taking a look at Huawei’s latest flagship, the P40 Pro. Unless you live in China and are embedded in the country’s unique mobile ecosystem, I can’t possibly recommend it. But that doesn’t mean it isn’t a remarkable piece of hardware.

Like Samsung with its Galaxy S and Galaxy Note series, Huawei has two flagship lines: the P series and the Mate series. The P series is roughly analogous to the Galaxy S in that it’s the more mainstream, design-forward device, whereas the Mate series tends to be aimed at power users, like the Galaxy Note. Unlike Samsung, though, Huawei’s flagships look dramatically different to each other.

“They are dual flagships for Huawei — we try to keep them separate,” said Huawei designer Quentin Tang in a recent roundtable interview with reporters. “The Mate series represents our technology flagship, including the very latest advancements. The series looks at the beauty we can create through science and technology. The P series is based on sensitivity — it’s like looking at an ancient painting on the inside of a cave as a way people use it to portray feelings and emotions. It’s not about technology, it’s about emotion.”

Those are lofty, perhaps dubious words. But what they tend to mean in practice is that the P series makes use of softer, rounder designs, and that’s certainly the case with the P40 Pro. Its key design feature is an OLED screen that subtly curves on all four sides, rather than just the left and right edges.

I don’t want to overstate the value of this because it’s more of an aesthetic flourish than anything and might not work great in a case, but it really is quite nice. Swiping up from the bottom of the screen to unlock the phone or bring up the multitasking menu is really smooth, and once you’ve used the P40 Pro for a while, those swipes start to feel unnecessarily obtrusive on other phones.

The screen also looks great. The curves are subtle on all four edges, even more so on the top and bottom — accidental touches or visual distortion haven’t been issues for me on this phone. But the light always seems to catch the screen’s edges in an attractive way; head-on, the P40 Pro looks more like an amorphous mass of gloopy glowing pixels than a flat display panel. The 2640 x 1200 resolution also seems like a smart move; it looks noticeably sharper than 1080p at this 6.6-inch size, but I’m not sure 1440p, like you’ll find on Samsung’s S20 line or the OnePlus 8 Pro, would be a significant upgrade in practice. This is also Huawei’s first phone with a high refresh rate display, at 90Hz.

In these days of nearly bezel-less displays, most phones distinguish themselves design-wise from the back. That’s not the case with the P40 Pro — partly because of the unusually curved screen but mostly because its back panel is very boring. There’s a gigantic camera bump with a Leica logo, and that’s about it. It doesn’t help that my review unit has an unflattering metallic gunmetal-style finish that picks up fingerprints like flames attract moths. Overall, I think last year’s Mate 30 Pro is a much more attractive device, with its aggressive curves and contrasting back panel: bring on the Mate 40 Pro.

So, that camera bump. Huawei’s last couple of P series phones have offered breakthrough camera performance, and while there isn’t necessarily a single standout feature with the P40 Pro, it acquits itself more than well enough. On a purely technical level, I think this is the most impressive smartphone camera on the market.

The 1/1.28-inch 50-megapixel primary camera sensor is, as far as I’m aware, the largest available on a phone unless you count historical oddballs like the Panasonic CM1 or the Nokia 808 PureView. It’s even larger and higher-resolution than the fabled Lumia 1020. Despite the large physical size, Huawei is using dual phase-detection autofocus across the entire sensor, and the results are excellent. Regular P40 Pro photos are extremely detailed with wide dynamic range, and the camera feels snappy in action. Low-light shots look awesome even outside of the separate night mode, which honestly feels superfluous.

This alleyway, for example, was almost completely pitch black when I shot it in the P40 Pro’s regular shooting mode, which sometimes tells you to hold still for sharpening but for nowhere near as long as the night mode. Sure, it’s not perfectly sharp across the frame, but I want to reiterate that I could see very little of this with my actual eyes:

The combination of the larger sensor and f/1.9 lens delivers shallower depth of field than other phone cameras, though you won’t mistake the natural bokeh for that of a DSLR. Here’s a comparison between a photo I took of an iPhone with the P40 Pro and one I took of the P40 Pro with a Sony RX100, a high-end compact camera with a larger 1-inch sensor. I think the P40 Pro acquits itself very well: 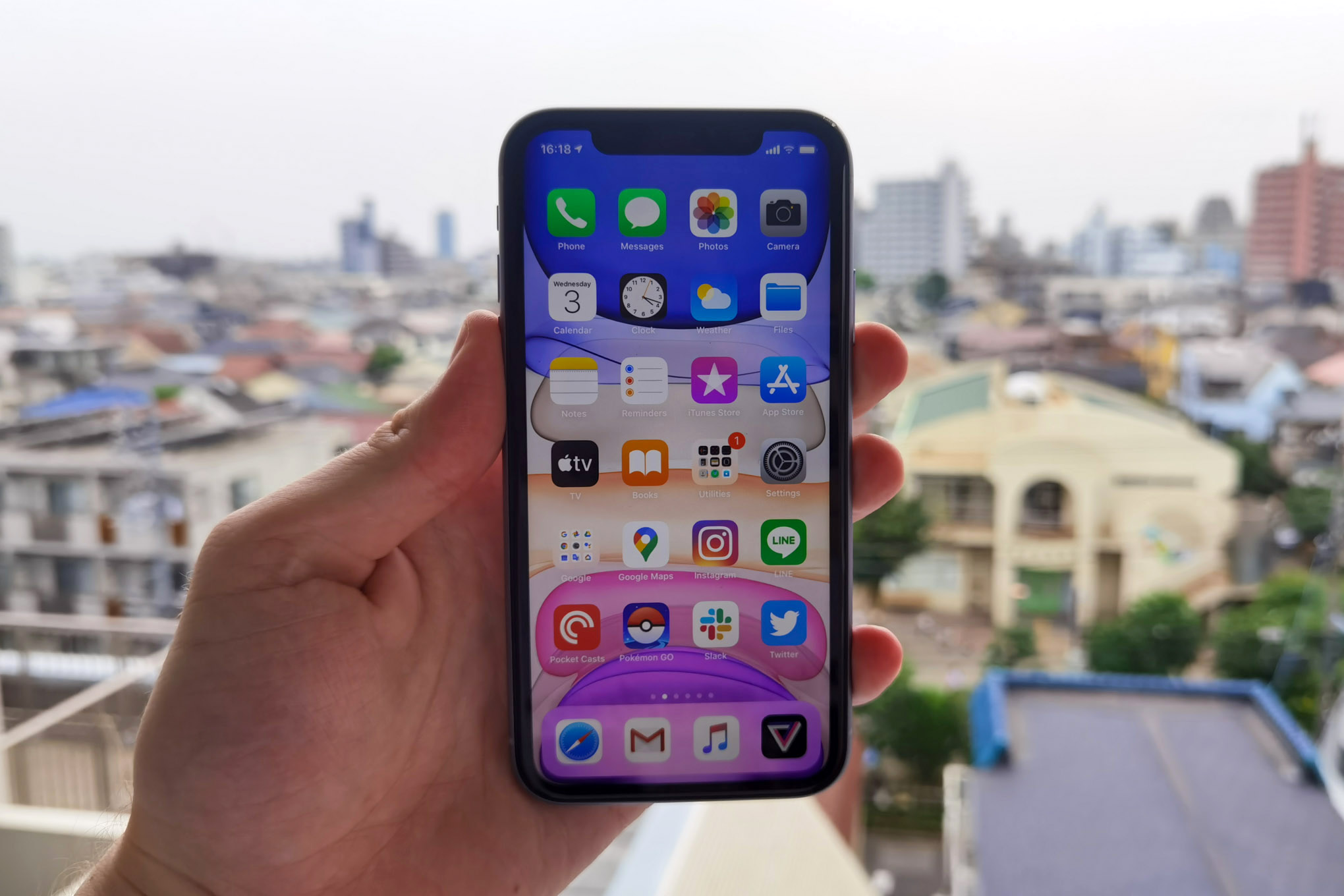 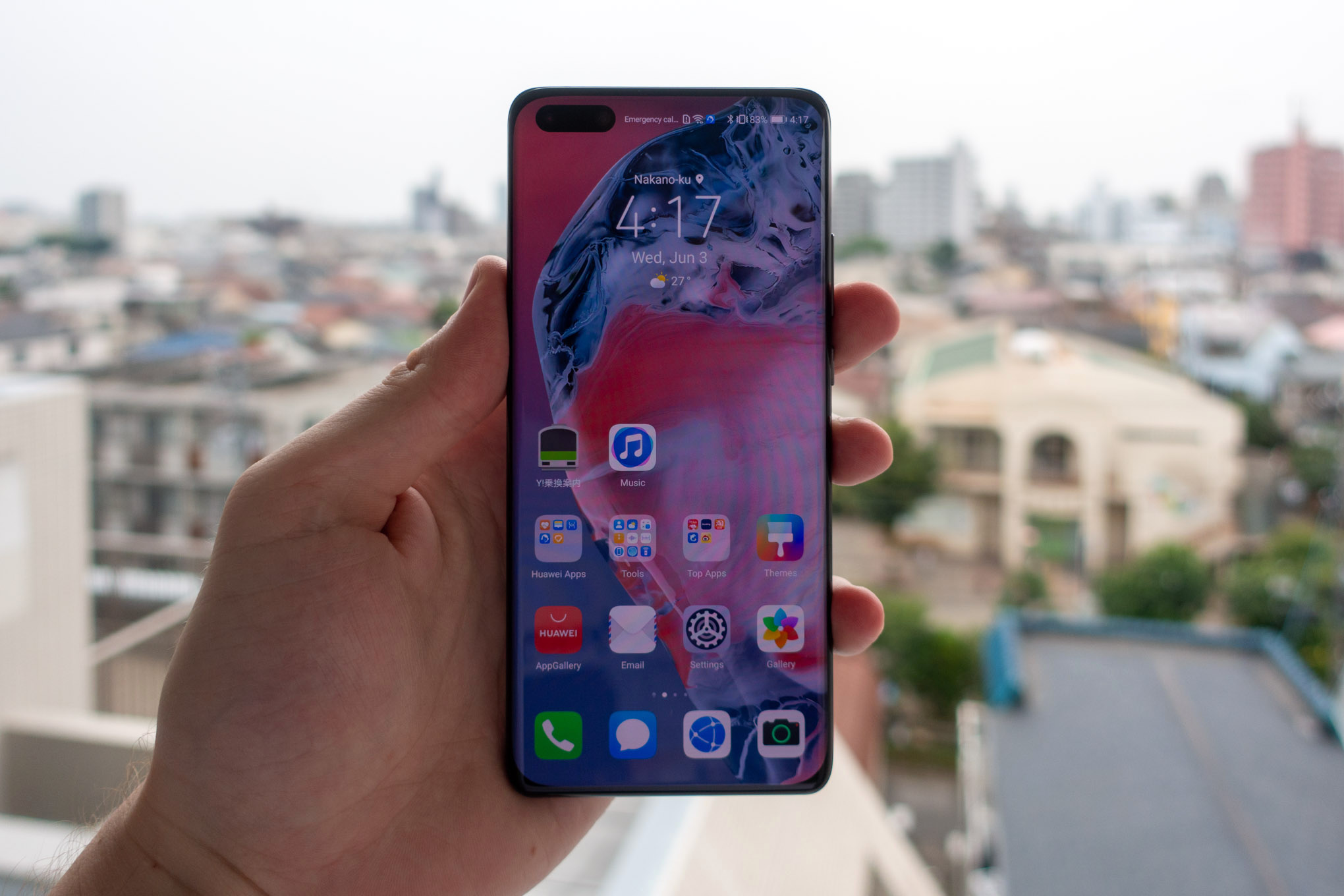 The 5x periscope telephoto lens returns from the P30 Pro, though the sensor resolution has been upped to 12 megapixels. Huawei doesn’t have the unique zoom advantage it used to, as companies like Oppo have deployed similar periscope modules, but the implementation here is as good as any as you’ll find. Behold, this quick 10x snapshot of Mount Fuji from my apartment. (I live about 75 miles away from Mount Fuji.):

And here’s another 10x shot in cloudy daylight:

Periscope telephoto cameras are still a rarity in the US market; it’s basically just the Galaxy S20 Ultra, which otherwise didn’t acquit itself so well in the camera department. The P40 Pro isn’t available in the US, of course, but I do want to reiterate that this is a legitimately great feature when shipped as part of a well-rounded camera system. It changes the way you think about your phone camera.

The ultrawide camera has a 1/1.54-inch 40-megapixel sensor. That’s bigger than the 40-megapixel primary sensor in the P30 Pro. The result is that the gulf in quality between the main camera and the ultrawide is much less pronounced on the P40 Pro than on most other phones. The catch, though, is that the ultrawide is… well, less wide than most competitors, at around 18mm-equivalence compared to roughly 13mm on the iPhone 11. Here’s a comparison between the two: 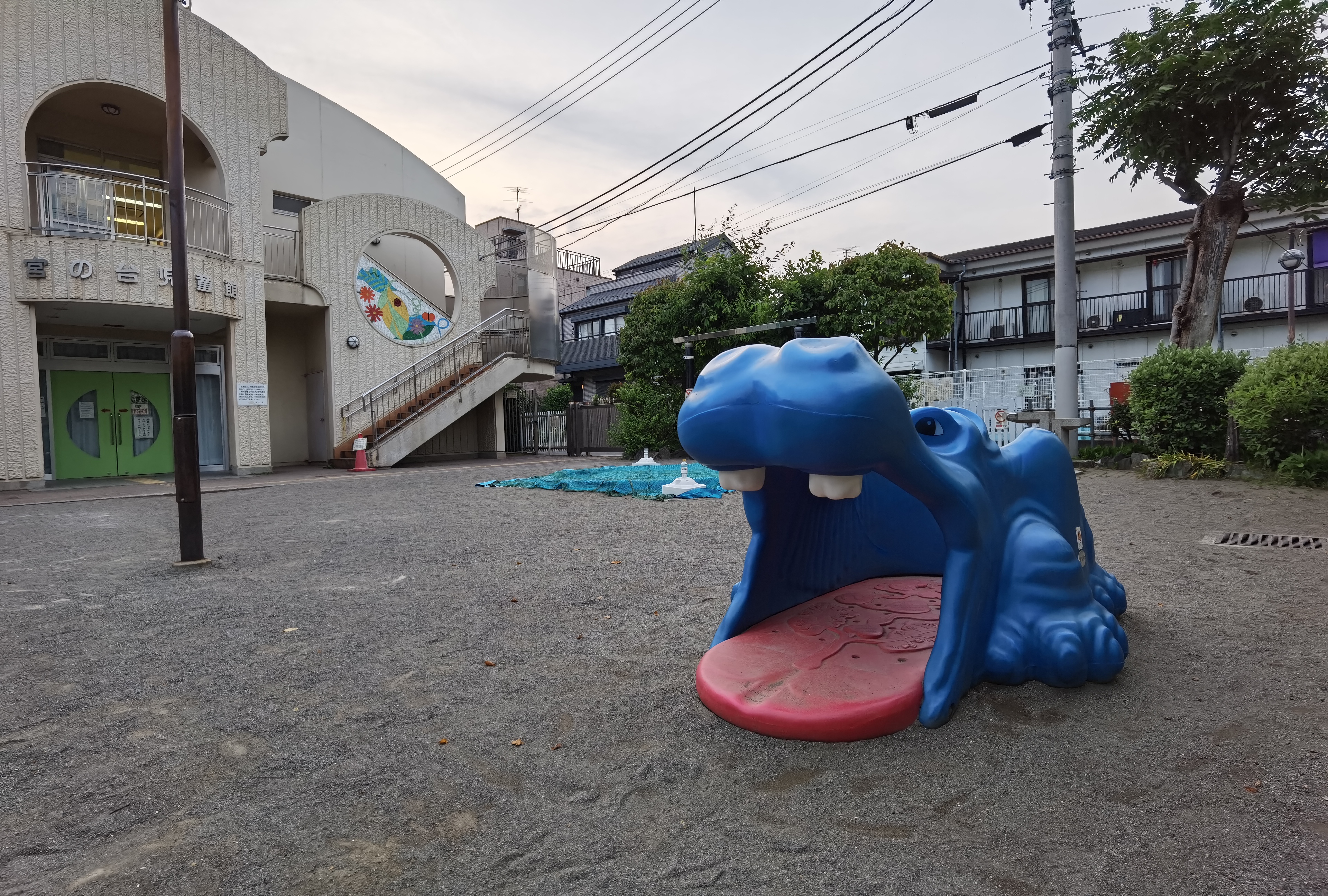 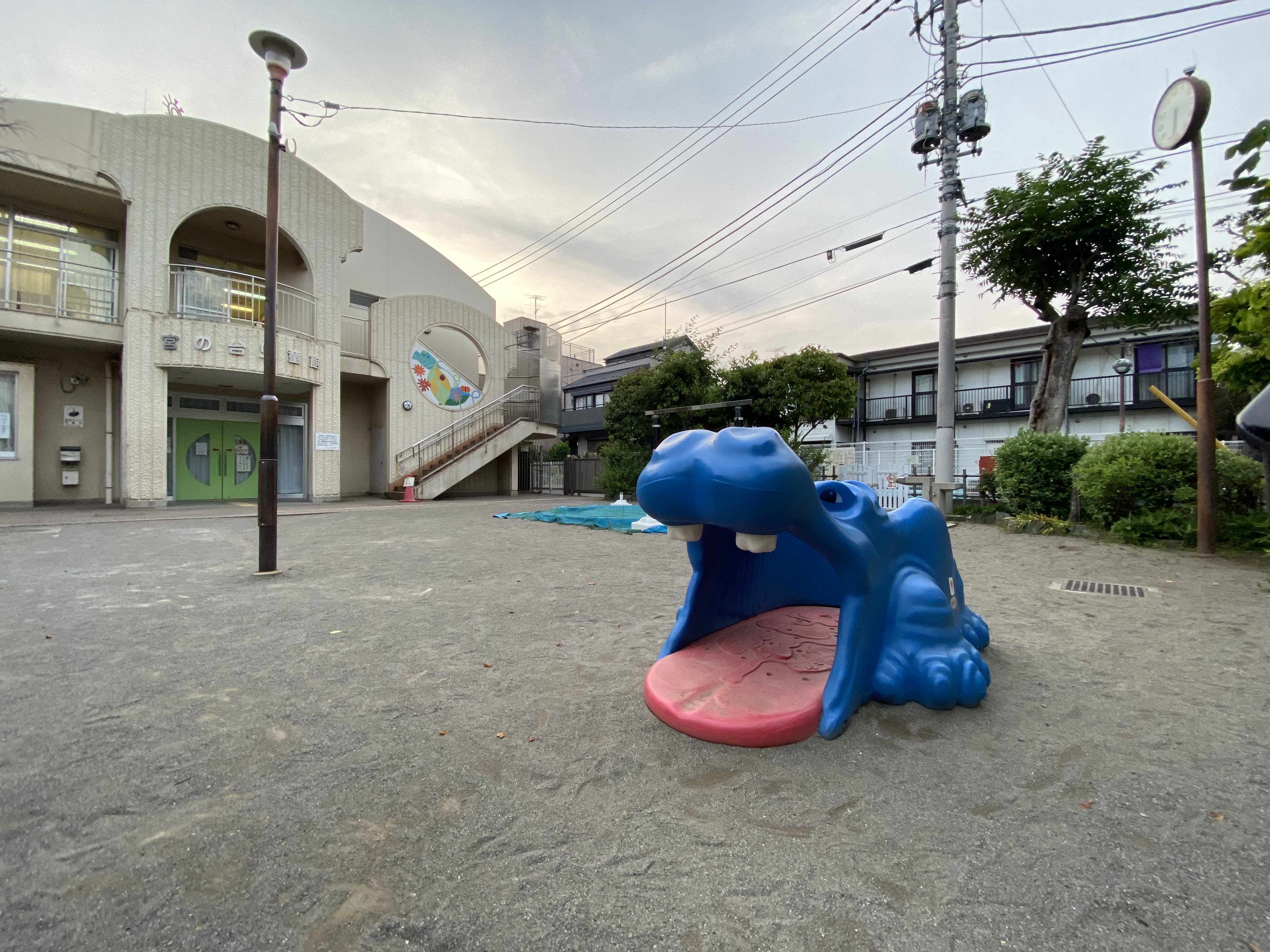 This is presumably because of the constraints inherent to designing lenses for physically larger sensors. 18mm is still plenty wide for virtually any situation, but it’s something to consider if you want the most warped perspective possible out of your ultrawide phone camera. I prefer Huawei’s trade-off. The P40 Pro photo above isn’t as wide, but its image quality is far better. Look at the iPhone’s muddy ground detail and purple fringing in the power lines.

I would not necessarily say that the P40 Pro automatically produces the most pleasing photos straight out of the camera, nor that it has a particular style. Its white balance metering can be a little indecisive at times, giving images an unwanted red or green tint, and I think the iPhone 11 and Google’s Pixel phones do a better job at turning out photos with a consistent look. But you almost always get crunchy detail, balanced exposures, and enough dynamic range to play with even if the colors aren’t nailed at first.

All of this hardware discussion is academic for Western users

I don’t have many other complaints about the P40 Pro hardware. The battery life is excellent, as Huawei is known for, and the Kirin 990 processor feels as fast as it did on the Mate 30. The haptics are good, and wireless charging is present, neither of which is a given with Chinese flagship phones. The biggest catch is with audio, which is handled by an unimpressive downward-firing speaker at the bottom edge of the phone. The lack of a headphone jack isn’t exactly surprising, but you’d better have some good Bluetooth buds or cans if you want to listen to anything on this phone at all.

But look, all of this hardware discussion is purely academic for Western users. Unless you exist in an extremely specific software bubble, you should not buy this phone. The P40 Pro doesn’t ship with Google apps. It doesn’t have the Play Store. It doesn’t even have a preloaded maps app.

It does have Huawei’s own App Gallery, which is a threadbare app store. It also has various ways to install apps from outside that store, including a method called Phone Clone where you transfer apps from a second device. None of them are reliable; I can’t get Twitter to launch on the P40 Pro through Phone Clone, for example, though it was fine on the Mate 30 Pro. Sometimes apps like Uber won’t work even if you can run them due to their baked-in reliance on Google Play Services. I love this phone’s hardware, but not enough to jump through its many software hoops. Often, those hoops prove impossible to jump through.

I wrote about this extensively after using the Mate 30 Pro for a while, and I wondered if Huawei would spin some deals for the P40 Pro to make it more usable for a mainstream Western audience. As far as I can tell, basically nothing has changed. If you want to read more about what it’s like to use a Huawei phone without Google, I encourage you to read my earlier piece. But the bottom line is that it almost certainly isn’t worth the effort. You could use this as your main phone, sure. You could’ve used a Windows Phone in 2015, too. I would not have recommended that you do either.

Huawei did what it could with the P40 Pro, and I commend it for the effort. This is as good a chunk of mobile hardware as you’ll find in 2020, and if you do happen to live in China where Google’s services are irrelevant, it’s a top-tier flagship experience. Unfortunately, hardware isn’t all that matters, even though the P40 Pro’s critical software failing in the rest of the world is largely out of Huawei’s control.

It doesn’t. It probably doesn’t support the apps you need to use, either. And Huawei is no doubt aware of that. This makes the P40 Pro’s global launch a unique phone release in 2020, one that represents more of a technological flex than a serious consumer offering. I admit that I am impressed by the flex. But if you’re reading this in a Western country, don’t buy this phone.